An International Fetal and Newborn Growth Consortium dedicated to improving perinatal health through the development of new fetal and newborn growth standards, providing tools for the continuity of care from conception to 5 years of age.

The International Fetal and Newborn Growth Consortium for the 21st Century, or INTERGROWTH-21st is a global, multidisciplinary network of more than 300 researchers and clinicians from 27 institutions in 18 countries worldwide, coordinated from the University of Oxford. It was launched in 2008 by José Villar & Stephen Kennedy to challenge the assumption that babies inherently grow differently around the world. The project is the largest, population‐based, prospective study of fetal and newborn growth and development ever conducted, involving nearly 60,000 mothers and babies. The INTERGROWTH-21st Project is based at the Oxford Maternal & Perinatal Health Institute (OMPHI), Green Templeton College, University of Oxford. The Project is supported by a generous grant from the Bill & Melinda Gates Foundation.

We are dedicated to improving perinatal health globally and committed to reducing the millions of preventable newborn deaths that occur as a result of preterm birth or poor intrauterine growth. In order to meet this goal, we need international growth standards to measure and improve maternal and newborn clinical care, and compare outcomes across populations.  Such standards exist to monitor the growth of infants and children.  They are the WHO Child Growth Standards, and their release in 2006 was a landmark achievement.  These scientifically based standards are now used worldwide. However, the fetal and newborn counterpart has been missing.

Our primary aim was to study growth, health, nutrition and neurodevelopment from <14 weeks of gestation to 2 years of age, using the same conceptual framework as the WHO Multicentre Growth Reference Study (MGRS), so as to produce prescriptive standards to  complement the existing WHO Child Growth Standards, and a new phenotypic classification of the fetal growth restriction (FGR) and preterm birth syndromes.

We implemented three population-based studies using standardized methods, and clinical and research protocols.  We gathered a rich body of data on health, growth and nutrition from pregnancy to early infancy from close to 60,000 women and newborns across five continents, making the INTERGROWTH-21st Project the largest collaborative venture in the field of perinatal health research to-date.

Primary data were collected on a population-based sample of healthy pregnant women. The tools describe how fetuses and newborns should grow in all countries rather than the more limited objective of past growth references which describe how they have grown at specific times and locations. This allows for evidence-based evaluation of nutritional status at birth and measurement of the impact of preventive and treatment interventions in the community.

The principal finding was that fetal skeletal growth and newborn size at birth are strikingly similar around the world when maternal health, social and nutritional conditions are optimal, and women have access to evidence­‐based care. The data is in keeping with the findings  of the WHO MGRS on the similarity of growth in breast­‐fed, healthy children around the world.

These  landmark observations led to the publication of the first international early pregnancy dating standards; fetal growth standards, and newborn size at birth standards for gestational age and sex. Standards for the postnatal growth of preterm infants have been submitted   for publication. The public health significance of the INTERGROWTH-21st findings with regard   to fetal growth and perinatal outcomes is substantial.  This unique resource has enormous   potential to improve the quality of  obstetric and newborn care around the world and correct recognition of babies with growth problems. The ability to recognise the earliest faltering of   linear growth, or stunting, could enable more effective and timely interventions, avoiding the potential for metabolic problems and obesity associated with rapid catch­‐up growth.

the impact of our work

In collaboration with the Maternal Health Task Force, Harvard School of Public Health, we   aim to position INTERGROWTH-21st at the centre of global, multi­‐directional conversations   about maternal and newborn health, in ways that are relevant to healthcare professionals, researchers and policymakers. The key message is that INTERGROWTH-21st fills critical gaps in the current understanding of human growth and development. Our most important products are the international, prescriptive standards ­‐ the platform upon which to implement any intervention that aims to improve the quality of health care provided to mothers and newborns.

The INTERGROWTH-21st Project provides: a) new evidence‐based tools to identify babies with growth problems in utero; b) a common method for quantifying and comparing the prevalence of nutritional deficiencies in populations at birth, and c) the first evidence­‐ based method for monitoring the postnatal growth of preterm infants. We estimate that   each year an additional 13 million more newborns worldwide will be identified as undernourished using the INTERGROWTH-21st standards compared to current practice.

Neurodevelopmental follow-up of babies from the INTERGROWTH-21st study and its extension, INTERBIO-21st are currently ongoing. 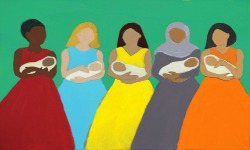