A study published in The Lancet Infectious Diseases shows the extraordinary global genetic diversity of HIV and highlights just how big the challenge is to develop a vaccine to combat the global spread of HIV. 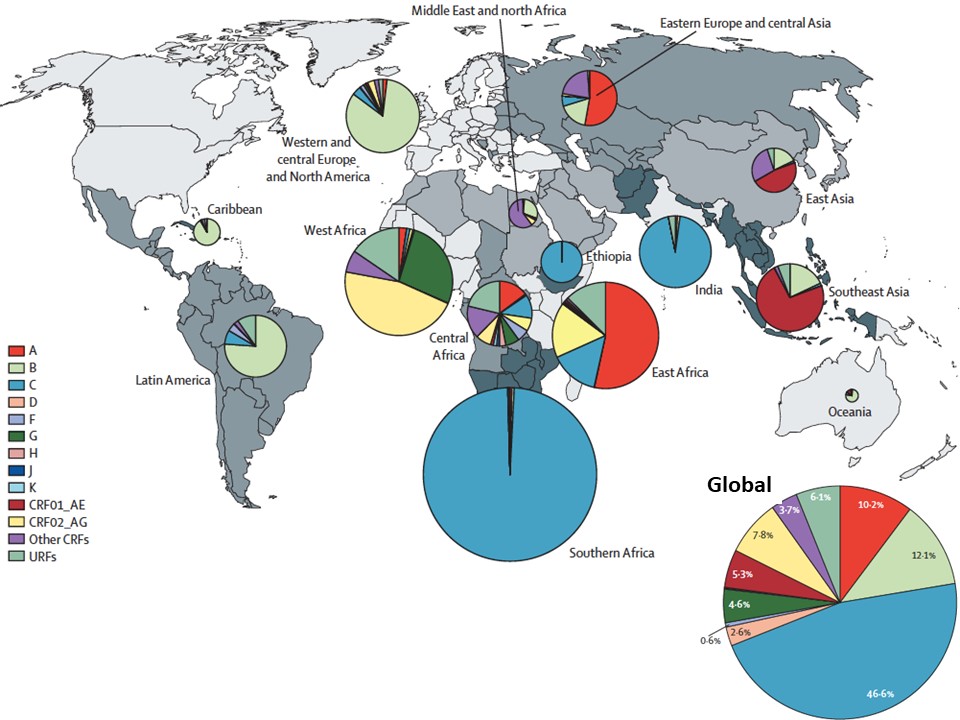 One of the most comprehensive studies of HIV around the world has revealed a map of the spread of subtypes of the virus across the world, revealing which strains are dominant in which country and region, and where new strains are emerging.

The systematic review and global survey, led by Dr Joris Hemelaar of the University of Oxford, analysed 383,519 samples from 116 countries spanning the period 1990-2015. It found that the greatest diversity of HIV was found in Central Africa, but it also showed that different variants of HIV prevail in different regions of the world. What is more, the distribution of HIV strains is evolving over time and recombinants are increasing and now account for nearly a quarter (22·8%) of all global HIV infections.

The analysis showed that so-called ‘subtype C’ causes the greatest number of global HIV infections (46.6%) and that subtype C is the near-exclusive strain of HIV in southern Africa, where HIV prevalence is highest. This data therefore strengthens the case for the prioritisation of the development of a subtype C-specific HIV vaccine for this region. A trial with a subtype C-specific HIV vaccine is currently under way in South Africa, the country with the biggest HIV epidemic, offering hope of protecting people from HIV.

In many other countries and regions, however, the HIV epidemic is composed of a number of different HIV strains which may necessitate complex cocktails of subtype-specific vaccines.

Dr Joris Hemelaar of the University of Oxford’s Nuffield Department of Women's & Reproductive Health, who led the research, said: ‘An HIV vaccine will probably be necessary to end the HIV pandemic, but one of the major challenges to the development of an HIV vaccine is the extraordinary global genetic diversity of HIV-1. It is important to realise that different HIV strains can differ by around 25%, whereas the yearly change in influenza is only a few percent, but necessitates a new flu vaccine every year. This is why it is important that HIV vaccine immunogen sequences match, as closely as possible, the viral sequences circulating in the target population.’

‘Similarly, it is crucial to keep HIV tests up-to-date as the virus changes to make sure that new strains don’t slip under the radar and go undetected in blood donor screening, surveillance, and clinical diagnosis and management. Early diagnosis and treatment are key to stopping the spread of HIV and being able to offer effective treatment.’

‘We hope that this study will provide a useful resource for researchers to help us focus their attention in each region. Ongoing surveillance of the global molecular epidemiology of HIV remains crucial for the development of HIV vaccines, as well as maintaining accuracy of HIV diagnostic and viral load assays.’

Globally, subtype C accounted for nearly half (46·6%) of all HIV-1 infections in 2010-15. Subtype B was responsible for 12·1% of infections, followed by subtype A (10·3%). The study also revealed that almost a quarter (22.8%) of new HIV infections are now recombinant varieties.

The full paper ‘Global and regional molecular epidemiology of HIV-1, 1990-2015: a systematic review, global survey, and trend analysis,’ can be read in The Lancet Infectious Diseases  here.

It was depicted on the front cover of the February issue of Lancet Infectious Diseases.